CEO Origins: Analyzing the Career Genesis of the Top 100 CEOs 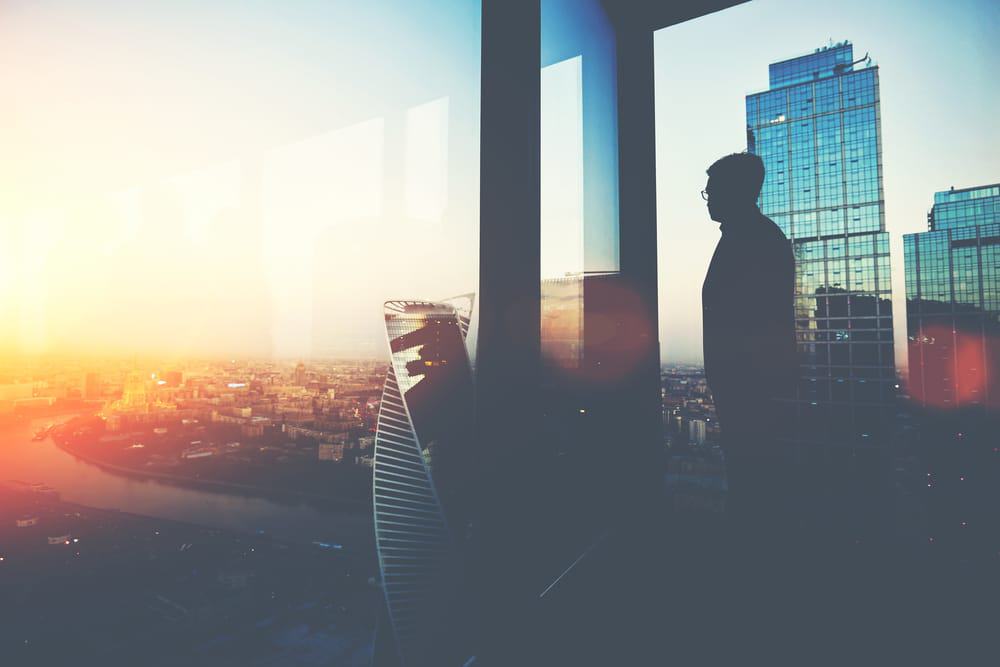 It’s the ultimate American success story: An entry-level employee works hard, ascends the corporate ladder, and eventually goes on to become a CEO. We decided to dig into the pasts of today’s CEOs to discover more details about these triumphant tales. How many CEOs actually got their start at the company they now helm? How old were these leaders when they first launched their careers? And which companies gave a start to multiple future CEOs? Check out the infographics below to find out. 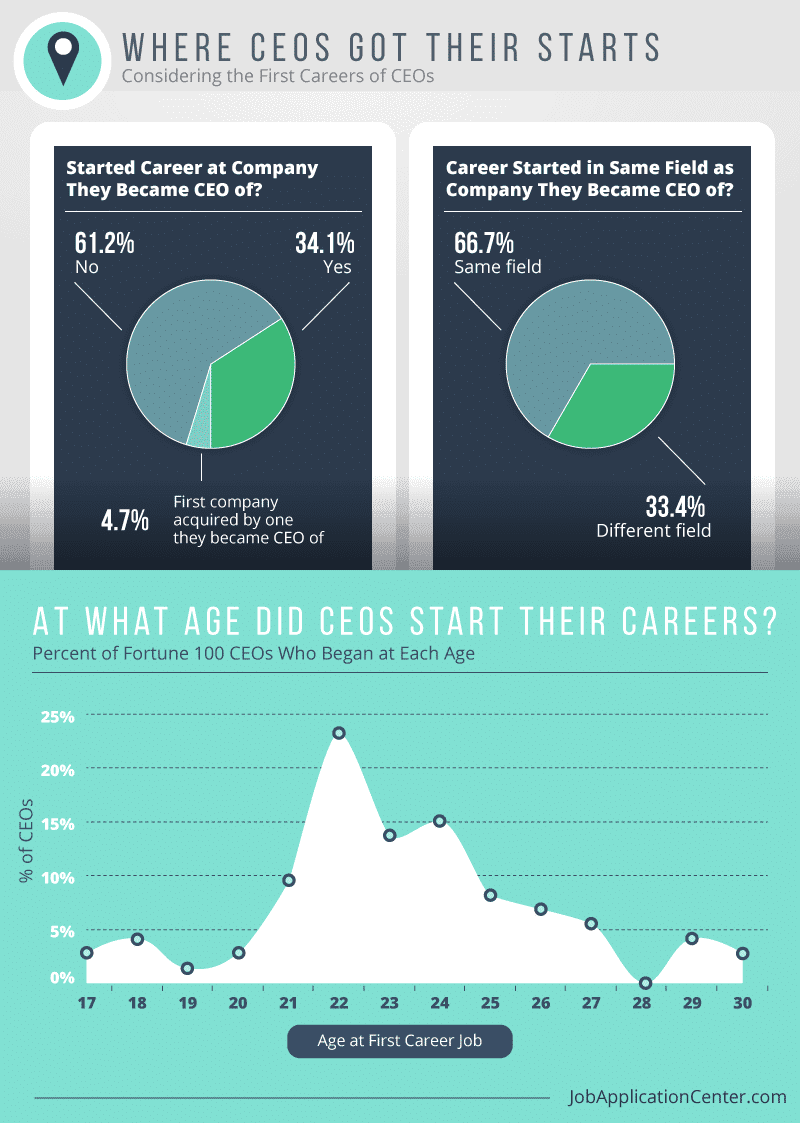 The Early Years of CEOs

We investigated CEOs’ career beginnings to determine how their entry-level professional jobs (as opposed to typical teenage summer jobs) correlate with their current CEO positions. According to our data, around six out of 10 CEOs started at a different company from the one they now lead, and slightly more than three in 10 got their first job at their current company. Almost seven out of 10 began their career in the same field as they’re currently in, while slightly more than three out of 10 started in a different field.

When it comes to age, the early to mid twenties are by far the most common time for CEOs to launch their careers. Nearly a quarter of CEOs held their first professional position at the age of 22 – frequently the age at which people who began college after high school graduate with a four-year degree. Very few were teenage wunderkinds, and very few were 28 or older.

Who are the CEO success stories who had their humble beginnings at the same company they went on to lead? Walmart CEO Doug McMillon was once an assistant manager; Rodney McMullen worked as a stock clerk at The Kroger Company before becoming CEO; and Muhtar Kent, CEO of Coca-Cola, got his start as a truck driver for the company. 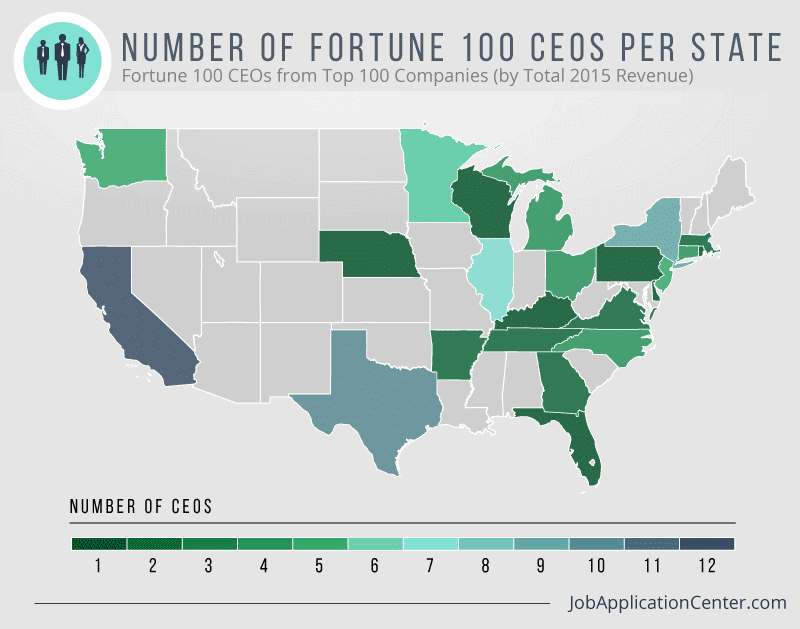 Fortune 500 Companies are certainly not distributed equally around the country – in fact, almost 44% of the companies have headquarters in the top five states. California is home to the highest number of Fortune 500 CEOs – no surprise, as it’s a hub for technology and entertainment. Closely following is Texas: The thriving oil industry means the the Lone Star State is a hotspot for large energy firms, which run the gamut from mining to equipment, pipeline to transport. Illinois (a hub for food production and agriculture) and New York (the nerve center for financial services – think Wall Street – as well as telecommunications) also rank high on the list.

In general, the Northeast and Southeast house more than their share of Fortune 500 CEOs. Aside from California, Washington state is the only western state to make the list. Twelve states actually have no Fortune 500 companies, including Montana, Wyoming, and Alaska in the West, as well as Vermont, New Hampshire, and Maine in the East. Why? Simply put, company leaders tend to gravitate to cities with major socioeconomic presence. 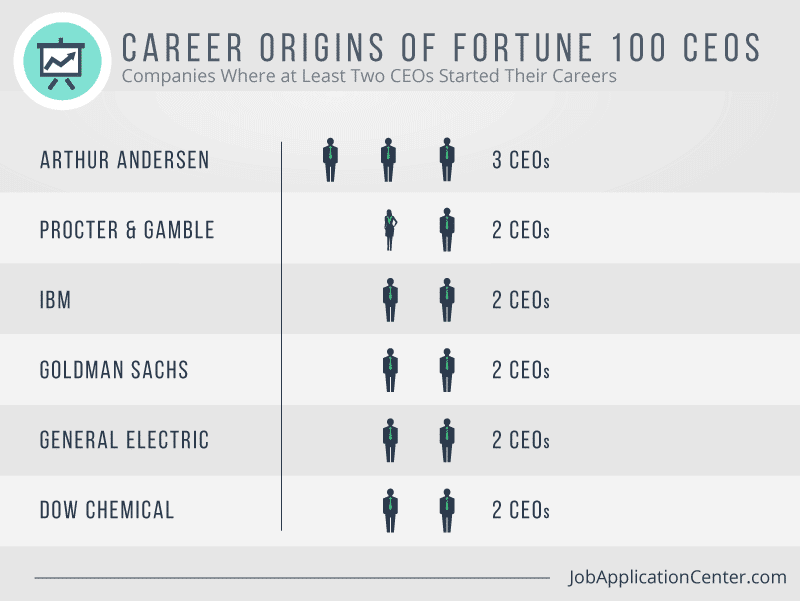 Of all the companies we looked at, Arthur Andersen had the highest number of employees–turned CEOs. Three employees of the huge accounting firm went on to become CEOs of other companies: DirecTV, Halliburton, and UnitedHealth Group.

Some employees find a unique way to break into a certain company. For instance, when current Halliburton CEO Dave Lesar worked for Arthur Andersen, his first client was none other than Halliburton.

Rising to the Top

Our investigation revealed some interesting findings. While some CEOs do go on to lead the company they start at, more than 60% go on to lead a different company. Nearly 70% stay in the same field.

People interested in working for Fortune 500 Companies will have the best luck in states including California, Texas, New York, and Illinois, which are home to the most of these firms. And certain companies (spanning various industries) reveal a tendency for producing CEOs.

While no tried-and-true formula exists, some experts suggest a solid education, varied career experience (for instance, a background in consulting), and specific strengths including a high level of ambition and excellent communication skills are the building blocks to becoming a CEO.

As the above information reveals, opportunities for promotion exist in major companies. And for people eager to ascend the corporate ladder, it can’t hurt to examine the career paths of those who did just that.

We retrieved a ranking of the Fortune 100 companies from the top 100 companies in Fortune.com’s Fortune 500 ranking. We then determined company CEOs from public information and gathered information about the career genesis of Fortune 100 CEOs through a variety of sources, as detailed in this Google document.

JobApplicationCenter.com encourages the sharing, hosting, and redistribution of these images and results. When doing so, we ask that bloggers and journalists link to this page so their readers can access all assets available and be aware of the full methodology.