Who Has Job Benefits?

Most people know down to the dime what to expect on their next paycheck. But many employees may not spend enough time thinking about benefits. After all, research shows that employees with access to better benefits packages experience higher job satisfaction, miss fewer workdays, and are less likely to resign.

We decided to tackle the topic in order to uncover which workers have better access to certain benefits based on various factors, including wage and employment status (full-time or part-time). We also ranked the benefits to determine which are most most commonly available and examined some recent trends in unemployment and health insurance. Explore the graphs below to see how your benefits stack up. 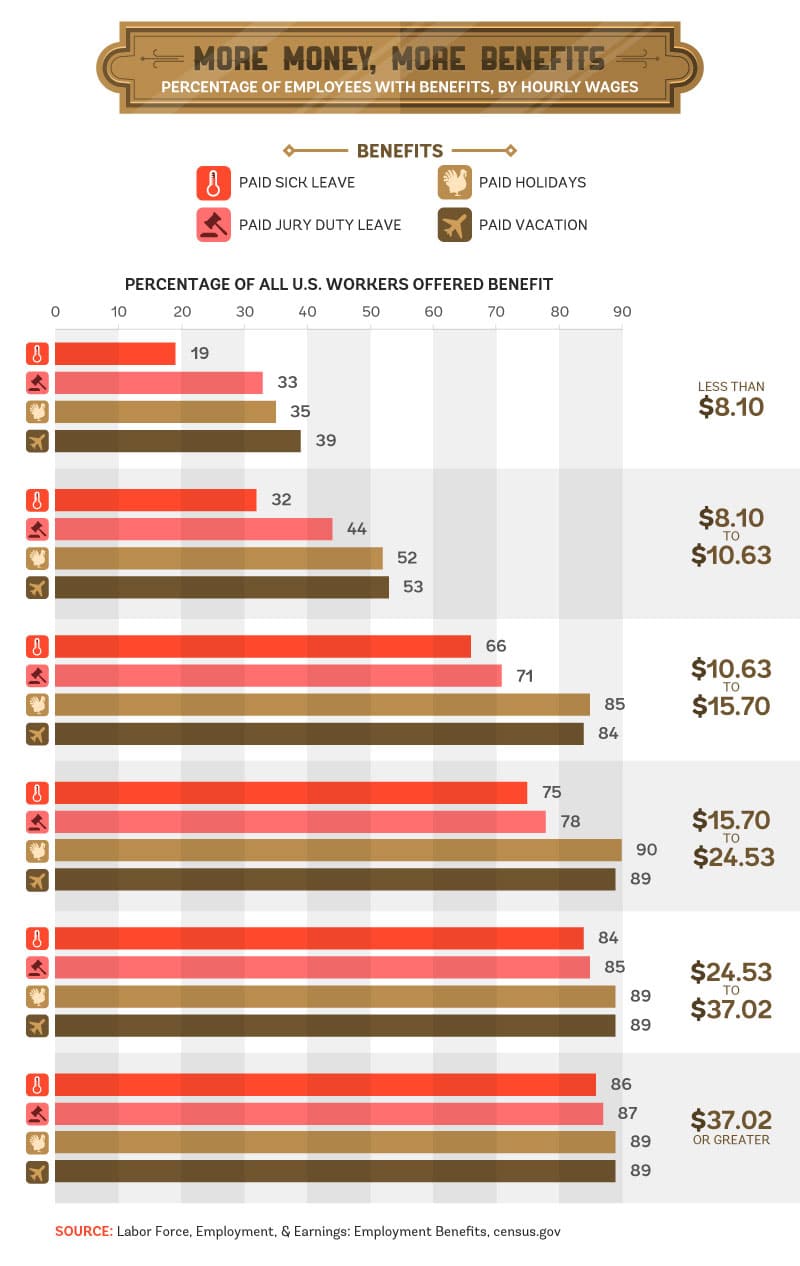 There’s no sugarcoating this fact: The more you earn, the better your benefits – period. Employees on the lowest end of the pay scale (drawing less than $8.10 per hour) are the least likely to receive paid sick leave, jury duty leave, holidays, and vacation time. The likelihood of receiving better benefits spikes for employees who earn more than $10.63 per hour and continues to increase from there. As states across the country follow New York’s lead in raising minimum wage, it will be interesting to see whether workers who receive pay hikes will see a correlating increase in benefits – or whether the numbers on the above graph will simply shift as a result.

Paid vacation and holidays are the most common benefits across the board, followed by paid jury duty, and then paid sick leave. Unfortunately, only 19% of employees who hover around minimum wage are eligible for paid sick leave, while 86% of highly paid ($37.02 per hour) workers do. In other words, for a well-compensated employee, an illness is inconvenient – but for a low-paid worker, it can be a financial disaster. Many in the U.S. – including the President – would like to see this remedied.

Now that we’ve examined how wages affect benefits, let’s take a look at how paid leave differs for employees who work part-time versus full-time. 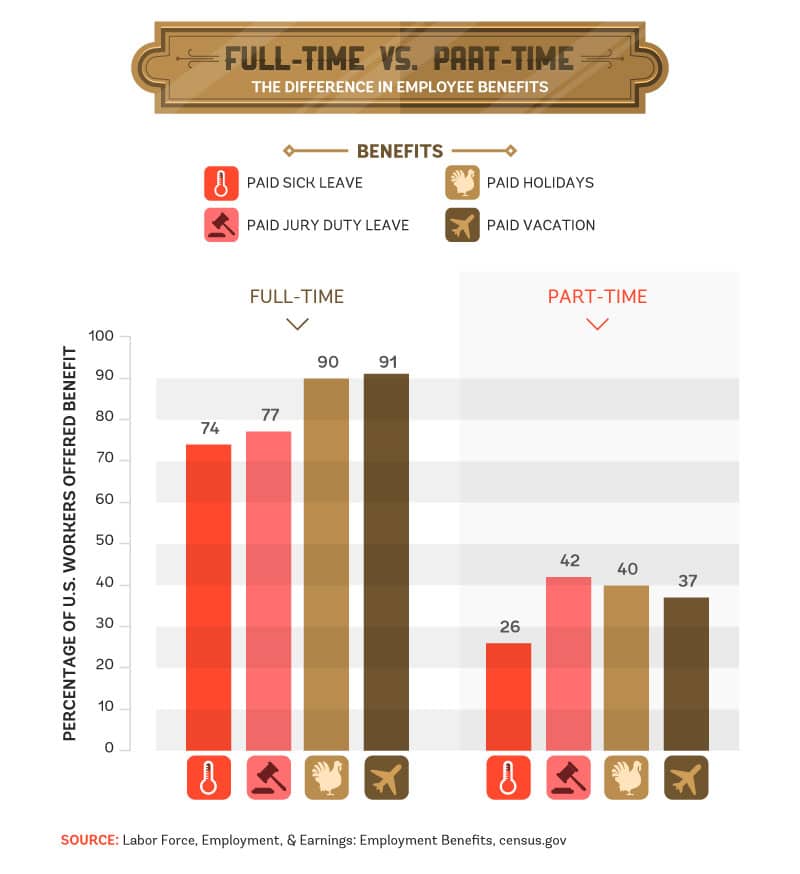 Whether by choice or by necessity, many Americans today hold down part-time jobs rather than typical eight-hour gigs. While some may enjoy the flexibility and extra time off, it’s clear that lower paychecks aren’t the only downfall of holding a part-time job. While about 90% of full-time workers enjoy paid vacation and holiday time, fewer than half of part-time employees get the same benefits. Roughly three times more full-timers get paid sick leave, and nearly twice as many can show up for jury duty without forgoing that week’s wages.

Sometimes one part-time job isn’t enough to make ends meet: That’s probably why more than a million Americans hold down multiple part-time jobs, which, cobbled together, can amount to full-time hours or even more – however, these people don’t have access to benefits that full-time workers have.

Employment status is a hot topic in this day and age: Some workers – including part-timers, freelancers, and independent contractors – feel employers take advantage of vague laws to avoid forking out full-fledged benefits. As a result, many people are pushing for change.

Next, let’s take a look at the U.S. unemployment rate and the rate of uninsured Americans. 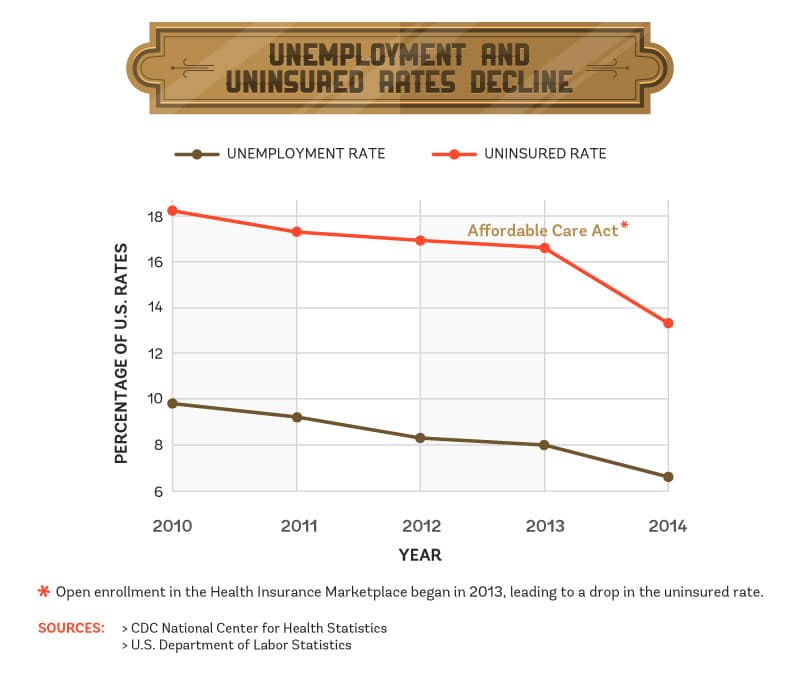 Since President Obama took office in 2009 – in the middle of a major recession – nearly 8.4 million jobs have been added and the number of job openings has doubled (to a record-breaking 5.7 million). The steadily declining rate of unemployment means that jobwise, our country is in the best shape in decades.

We’ve already looked at some key benefits, including different types of paid leave, but which other types of benefits do employers offer? And which are most and least common? 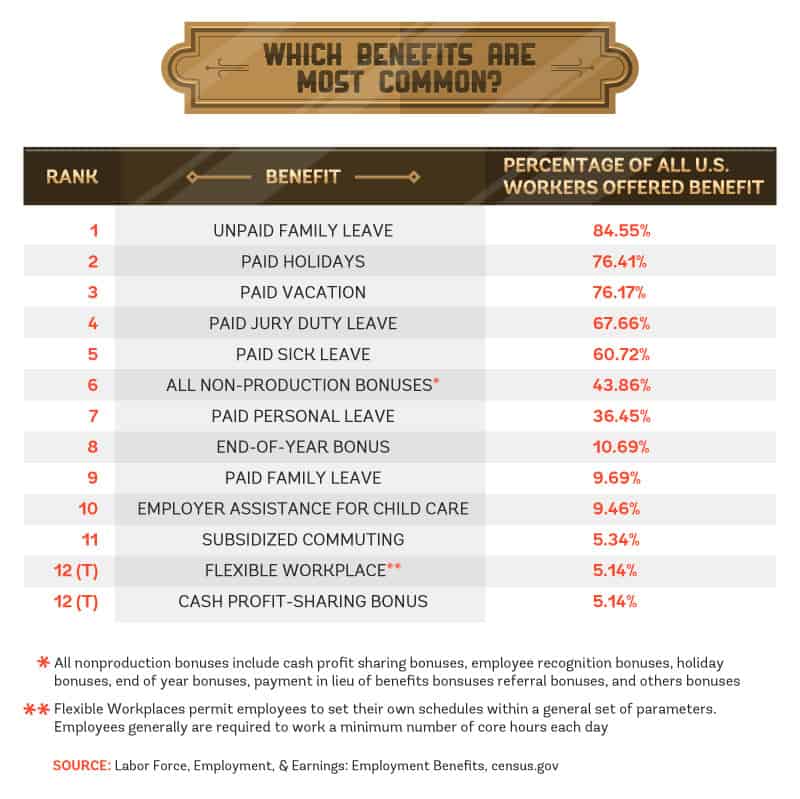 Available to nearly 85% of workers, the most common benefit we found was unpaid family leave. This policy allows eligible employees to take leave for family or medical issues without losing their jobs. Next on our list comes the four benefits we examined earlier: paid holidays and vacations (both available to about 76% of workers), paid jury duty leave (almost 68%), and paid sick leave (nearly 61%).

On the other end of the spectrum, it appears only a select few employers provide certain optional benefits: Around 5% offer profit-sharing bonuses, flexible workplaces (dropping the 9-to-5 requirement in favor of letting employees set their own schedules), and subsidized commuting. And slightly fewer than 10% offer child care assistance and paid family leave.

When it comes to benefits, how do unions come into play? Next, we examined the impact they have. 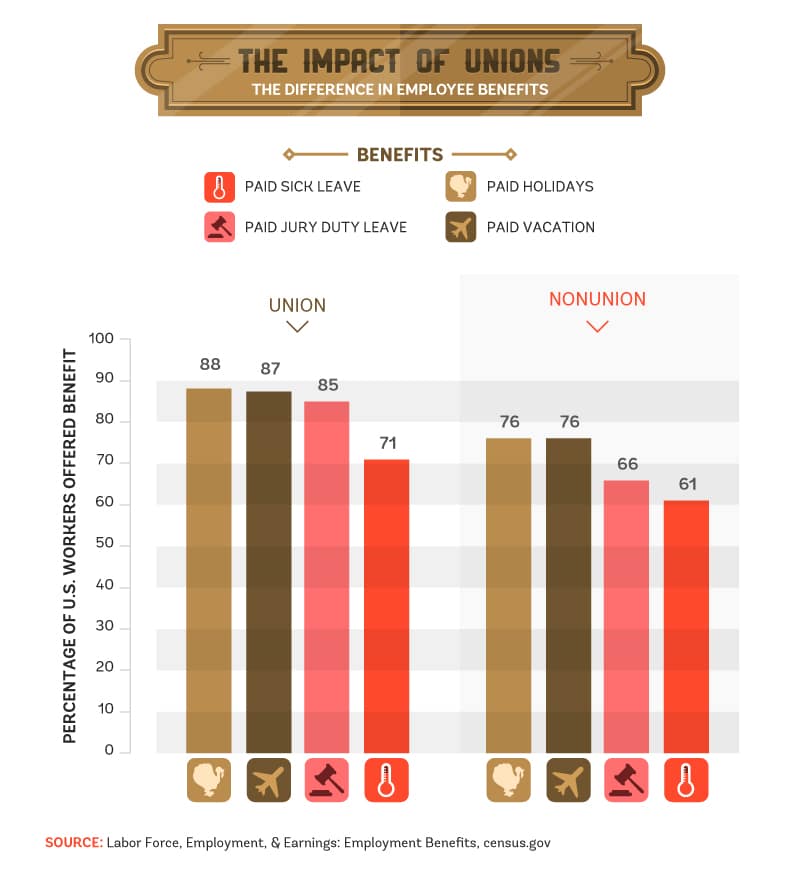 Every day, workers are faced with difficult decisions: Would you risk a day (or more) without pay in order to stay home with the flu, obey a jury summons, or care for a sick child? In a perfect situation, every worker would receive an adequate salary and benefits in order to thrive. In reality, if you’re a full-time employee earning over $37.02 per hour, you are much more likely to have access to more benefits than a part-time, low-paid worker.

Employers are only obligated to provide the benefits mandated by law – for instance, time off to serve in the military, vote, or serve on a jury – but offering the bare minimum isn’t the best way to stay competitive. (Some savvy companies even dazzle employees with free snacks.) With the dropping unemployment rate and uninsured rate, the country’s outlook appears positive. Let’s watch and see whether the upswing translates into greater availability of benefits for all workers.

Feel free to share, repost, and discuss the images, videos, and results found on this page freely. When doing so, we ask that you attribute the creators by linking to IncomeStore.com and this page so your readers may learn more about this research and access all available assets.